skip to main | skip to sidebar

This May 4 Gazette.net article about the May 3 Liquor Board Hearing for Club Amazon did not make it into this week's Laurel Gazette printed edition: Club Amazon to close temporarily, owners announce

After the May 3 Liquor Board hearing, the office of our District 1 County Councilman, Tom Dernoga, made inquiries with several relevant county departments regarding Club Amazon. Soon after that, the County Fire Marshall's office reportedly shut down Club Amazon effective May 5 apparently for continued violation of previous fire code citations.

This poster (no longer on the GOGO website to which it was posted on April 5, 2006) appears to have advertised a LIVE music program at Club Amazon scheduled for May 12 by the GOGO band RARE ESSENCE which, if performed as advertised, would have apparently been in violation of The Amazon's current Liquor Board license restrictions against LIVE music. 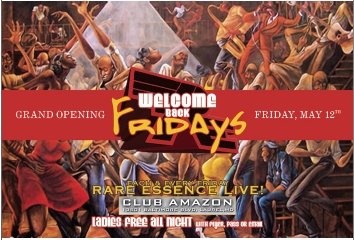