skip to main | skip to sidebar

You do not need to pre-register to speak at the May 3 Liquor Board hearing. Just come before 7 pm and sign up to speak.

Even if you don't wish to speak -- still come and STAND UP in support of speakers you agree with.

As reported earlier in MH NEWS, the new owners of the Club Amazon on Route 1 operated the Stardust club in Landover, which was closed by the County under community pressure after a long and frequent history of violence. Now the Club Amazon, with its own long and frequent history of violence and drugs, has been the scene of continued violence under the new operation of the former Stardust owners.
The Prince George's Liquor Board will hold an already once rescheduled hearing to consider revoking the new Amazon owner's liquor license, under heavy pressure from many county citizens and organizations.
Please consider this message sent out today from Karen Coakley, President of the Beltsville Citizens Association.
QUOTE:
This past weekend there was a shooting at Amazon in Laurel. The owners of Amazon have a hearing scheduled next Wednesday May 3rd at 7:00 p.m. before the Liquor Board.
I am asking [you] to attend this meeting & once again ask the Liquor Board to CLOSE THIS ESTABLISHMENT! REVOKE THEIR LIQUOR LICENSE!!!

Amazon is not just a [City of] Laurel problem. It is a Police District 6 problem because Amazon is covered by the County Police. Every time the County Police are called to Amazon it pulls them from other areas of District 6. I know you are all aware of the fact that District 6 is as usual understaffed.
For those of you who do not know the history of Amazon -- the new owners used to run the STARDUST in Landover. The establishment was the bane of the community for years, drugs shootings etc ..... and it took years to get their Liquor License REVOKED!
We ALL need to make our voices heard before the Liquor Board and our Elected officials. Senator Giannetti, Delegates Frush Menes & Moe.
If you cannot attend, please email a letter [to Karen Coakley karenmcoakley@verizon.net calling for the revocation of the Liquor License and I will take it with me [Karen Coakley]
Last but not least please spread the word !!!!!
Karen Coakley karenmcoakley@verizon.net]
END QUOTE
The Liquor Board will hold this hearing at 5012 Rhode Island Avenue, Hearing Room 200, Hyattsville, Maryland 20781.
Letters of testimony regarding the "May 3, 2006 Amazon Liquor License Hearing" can be mailed directly to:
Prince George's County Board of License Commissioners
ATTN: Liquor Board
5012 Rhode Island Avenue Room 204
Hyattsville, Maryland 20781
301-699-2770

I am continuing to save web links to news about the Amazon club at this address. Please send any good ones i've missed to garolds@yahoo.com
Gary Stone, MH News 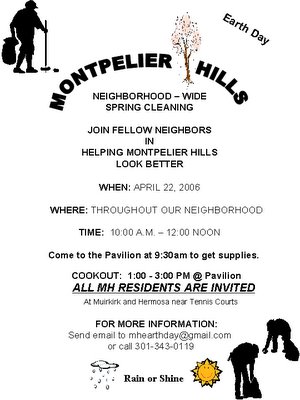 Prince George’s County, Maryland…Chief Melvin C. High said crime is down significantly in the first quarter of 2006. Homicides, and other violent crimes have decreased significantly, and homicide case closures are at an all time high.

“Everything happens in phases, and these results are the second phase for us. We are seeing results of groundwork we laid last year with tactical deployment, a focus on policing fundamentals and productivity, building the size of our force and strengthening our relationship with the community,” said Police Chief Melvin C. High. “I’m proud of the men and women of this Department, and I know that residents are proud of them, too.”

Chief Melvin High praised Assistant Chief Roberto Hylton, who heads the Patrol Services Bureau and the District Commanders who lead each of the county’s six Police Districts, along with the Special Operations Division (SOD), the Auto Crimes Task Force, and administrative duty members who have been redeployed to patrol activity.

High said the Patrol Services Bureau is the foundation of police departments
everywhere, and that the consistent and sustained work that Commanders and their officers have been doing everyday is the key component in the Department’s suppression and prevention strategy. “Officers on the street support the work of every other unit within the Department, and that leads to arrests and the closing of cases.”

Head of the Patrol Services Bureau, Assistant Police Chief Roberto Hylton said his troops are executing the fundamentals, and singled out traffic enforcement, field observations and gun and drug seizures as vital focal points for reducing crime. “Our strategy is fundamental policing. We’re using high visibility traffic enforcement, and field operations to protect residents and let criminals know that wherever they are, we intend to be, too.”

Hylton said that a solid addition of new officers made it possible to reincorporate beats into the Department’s Community Policing Model, a policing tradition that helps officers gain an acute familiarity with each community’s residents and businesses. The beat structure helps create trust between the Department and the community. Our new officers, well prepared at the academy, are gaining valuable on the street experience by working closely with more experienced officers. They’re ready and they’re helping us change the landscape on crime in the county.”

Hylton also credited citizens with helping to bring down Auto Theft and Property Crimes, with auto theft declining last year for the first time since 1999, and trending down another 18 percent so far this year. Hylton said, “Citizens responded to the education strategy that came out of the Department and the County’s Auto Theft and Vandalism Prevention Task Force. We appreciate their help.”

Chief High praised Support Services, which includes the Investigative Services Bureau, under which falls the Criminal Investigations Division (CID). He said the teamwork between Patrol and Support Services is showing in arrests and case closures. The official homicide closure rate this year is 84 percent versus 70 percent this time last year, and CID robbery closure rate is 43 percent versus 10 percent last year.

Colonel Darrin Palmer, Commander of the Strategic Management Bureau said the Department’s recruitment campaign had created a momentum to grow the force that was continuing into 2006. Palmer said the Department began the recruitment campaign in mid-year 2005 and got 3,540 applicants just in the second half of the year, with 1,019 applicants having applied so far this year. Colonel Palmer said, “The people we’ve accepted are the best out of those who applied. We’ll graduate 100 plus new officers from the current class, and we’ll begin a class of about 115 in July. Our role in the Department’s crime-fighting strategy is to get good people and prepare them to serve this community. We’re clear about that.”

On the matter of staying ahead of attrition, Palmer said a major recruiting strategy is a slow process that takes time, but the Department is ahead and he expects attrition to slow. “We put a strategy in place where there was none. Any notion that our recruitment and training strategy isn’t working is misguided.”

In closing, Chief High said “I am proud of the men and women of the Prince George’s County Police Department. As I told residents in the six community meetings that I held in our Districts, this Department has come back from a period of decline and disrepair, and at a time when crime was trying to put a stranglehold on this community. We were down, although never out.”

Chief High also said that input and support from citizens and residents on community safety matters has been a critical component to the Department’s success. “This community isn’t just talking about ridding itself of crime, it’s doing something about it and we’re going to continue to partner with them in as many ways as we can.”

It has been an honor and a privilege to serve as your home owners association president for the last two years.

I INVITE YOU TO A VERY IMPORTANT MEETING ON APRIL 18TH.

We are at the critical point in the negotiations with the
Bermans who plan to develop the 32 acres of land they own
adjacent to our community. The Bermans have worked
cooperatively with me, the Boards, and the Montpelier Hills
Investigative Working Group for the past 18 months.
Together we have written, revised, and refined a development
plan that I fully support, and I ask you now to join the
Board at our annual meeting where we will discuss the
upcoming development of our community. Equally important,
we will elect new Boards who will have the responsibility to
carry the process through to completion.

I urge all who can attend to come to next Tuesday’s meeting.
This may be the most important Board meeting at Montpelier
Hills in the 17 years that I have been a resident here. I
look forward to seeing you at Capitol College on April 18th.